Everything you create is your baby. Artists must nurture their art – enough so that it is not underdeveloped, but not so much that they no longer feel a connection to the final product. We see so much music being shared that it is easy to let a good musician slip through the cracks and get lost in rubble of premature art. 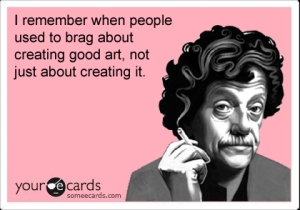 Although I see the positive nature in everyone putting out their thoughts and ideas, I also see a trend rising in which people demand instant fame. There is a balance between hard work and talent that must exist before fame. However, with the media it seems easy to get the fame without having much of either. Thus, I have intentionally kept my singing a secret up until this past weekend, when I had the chance to perform with an amazing band and close friends. I have not been on stage in years. Last time I was on stage I was doing Spoken Word poetry. This time I was finally able to sing. I am glad that I was able to do so now that I know myself as an individual. Although art is a great tool for finding yourself, in order for others to connect with your final product you must already have a strong sense of self. 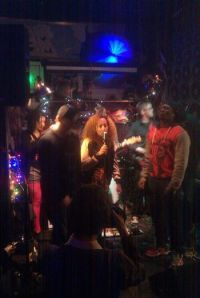 One of the amazing musicians I had a chance to perform with this weekend was Marko Kocic, also known as Vertigo, the Fly Writer. Marko is someone who has used art to grow as a person, and is now using it to show the world a version of himself that can only be “seen” through music. Vertigo is a 24 year old musician of Yugoslavian descent who was born in Germany and raised in Brooklyn.  He views the world in a different light and it shines through in everything that he does. Vertigo does not only rap, but he edits and creates the covers for his music as well. Everything that is put out by Vertigo is Vertigo. He knows who he is and is not willing to change that for anything in the world. 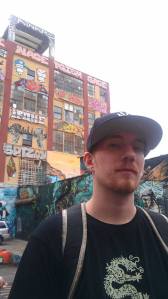 “I had already long been able to put “me” in my drawings, but had not discovered that with rapping. And while I was obsessed with rapping, I was not as much “me” in the raps as in my drawings. I think I have finally found a balance that I am proud of.”

The purpose of art is not fame. The purpose of art is putting a core version of who you are out into the world. We all want to be immortal, but being immortal does not mean to be recognized physically by many people. Being immortal means being able to put yourself – your true self – out into the world so that your ideas live on. Art is who you truly are. It is what stays once the body is gone. In order to achieve this, you must know yourself. For a long time Vertigo knew that he loved to rap. But growing up with immigrant parents and being a white rapper added extra pressure. For a while, this pressure caused him to create music that was not fully him. It is through this personal growth that he now is able to effortlessly put music out that he can be proud of.

“I never really released anything at first, I did not feel comfortable because it wasn’t completely honest with myself, but I think I realized at some point that I really not only wanted to rap, but I could do so, and still be honest, 100% real.”

Vertigo is currently working on several projects. He has just released an EP and Single with over 2,000 (real) views on youtube. He also works with Nicklelodeon and SNL, with editing and as a production assistant, and has combined his love of music, editing and art by creating album covers for himself and his fellow rappers.

“With my art, there is not really one specific message I want to communicate. I want to “say” me. I want my music to be a sound version of who I am. I think all great artists, their art is the pure form of themselves, you can tell a lot about who they are, at their core, from their music. Not from any specific set of words or notes in it, but from the vibe as a whole. I want to be able to do that, for someone to hear my music and be like “oh, now I know that guy, and where he is coming from.”