As I walk through the neighborhood I was born and raised in, I hear the word “pajonua” yelled at me from the mouths of old fashioned Dominican men. The Dominican slang word pajonua signifies a woman with messy and unruly hair.

As the daughter of a Dominican salon owner, my mother always took the time to “fix” my hair. Every morning before school she would wake up early and take up to 20 minutes putting my hair in a ponytail or doing some last minute straightening. Because my mother took so long fixing my hair in the mornings I rarely had time to eat breakfast, so every day I would go to school with my hair in a ponytail and my stomach growling. In my culture, having tamed hair is top priority. It is only now that we are witnessing some changes in the way we view curly hair. Change is coming because other cultures have started to acknowledge our Afro-Caribbean roots. However, we ourselves still have a long way to go.

When I was younger, my mother would always take her blow dryer with her every time we went to the Dominican Republic. It never made sense to me that after traveling to a hotter climate, we spent hours torturing ourselves by aiming hot air at our heads. The saddest part about this was that once my hair was straightened, I was not allowed to go into our beautiful waters. While my brothers enjoyed the beaches and lakes of the Caribbean, I sat and watched with the dreaded fear of having to sit under a dryer once again, should my hair touch water. My hair was my prison.

There was one summer in particular where I was so against touching my hair that I did not go outside for 3 days. I was a hostage in my own home. This was all because my mother was adamant against me leaving the house without my hair being in a tight ponytail or having it straightened. When my hair was in a ponytail and a strand was out of place, it was as if I was hiding a secret from the world. I felt like a baby born with a tail in the middle ages. My mother would rush to me and pull out the hair gel, brush and bobby pins. The world must not know of the mess I was born with. The world must be kept safe from it all.

My hair was the first thing that made me feel like I did not belong. Not only did I not have European hair, but unlike other Dominican girls, I loathed the process of getting my hair straightened. I hated the way it looked when it was straight, I hated the daily rituals of maintenance and I hated the fact that I was separated from my brothers constantly and not allowed to enjoy my youth to the fullest extent. My hair was my first realization of the inequalities I would be facing for being a woman of African descent. Inequalities perpetuated by my own culture.

It is Dominican salon protocol that every woman washes her hair once a week. This wash includes three shampoo sessions, one deep conditioning treatment and a lot of heat. If you know anything about caring for curly hair, you know that you should never over-shampoo your hair. I have not shampooed my hair in months. Instead I pre-poo and co-wash my hair. Curly hair needs as much moisture as possible. This weekly wash stripped my hair of its moisture. Every time my hair dried without the aid of a dryer it immediately turned into tumbleweed. It was an endless cycle. 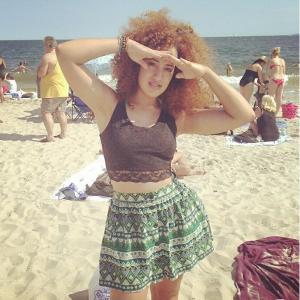 Growing up, my hair was relaxed every year and straightened every month. As I got older I refused to have my hair straightened so my mother made me put it in a ponytail. My hair was rarely loose.

It was only after attending a university where white people made up 85% of the population that I began to embrace my curls. While attending New School University, a campus once described as a “vanilla school” with “very few sprinkles,” I felt like I was constantly having to stand up for my race. As someone who was looked down upon by her own culture for not liking the same music, dressing the same way or “fixing” her hair regularly, this was new to me. My existence alone has always been revolutionary. Being in a predominantly white school made me proud of my ancestry. Who would have thought? After years of feeling like I did not belong anywhere I began to finally be my full self. I began to embrace the clique that is me. After attending a school unaware and sometimes even just straight up ignorant about my racial identity, I realized that it was up to me to create my own identity. I realized that my butt is big and so is my hair. Why should I flaunt one thing and hide the other? That being Dominican, or human for that matter, is about being true to the best that is in you.

Whenever someone calls me pajonua, I now think of my frustrated social studies teacher in junior high. He was well aware of how much physiological harm us Dominicans are doing to ourselves by culturally suppressing our natural hair; in the way we accept and view each other. I remember him telling his students, “Whenever someone asks you if you are Hispanic, Latino or Spanish, if you ever feel any confusion, just know that one thing that you are for a fact is Afro-Caribbean and you should accept and love this fact.”

My hair did not need taming, it needed to be understood, accepted and loved much like a misunderstood child. It was with accepting my hair that I came to unconditionally love and accept myself.